Doctors have some surprising suggestions for anyone who wakes up and can’t fall back asleep, the most common type of insomnia.

It is a frustratingly common scenario: You fall asleep easily at bedtime but are wide awake at 2 or 3 in the morning. Only after a half-hour or more of staring at the ceiling can you finally fall back to sleep. This middle-of-the-night insomnia happens to everyone every once in awhile. It is an appropriate, normal response to stress, doctors say.

But for a significant number of people it can become a chronic disorder. In fact, this type of insomnia is the most common, more so than having trouble falling asleep at bedtime.

About 30% of American adults have symptoms of some sort of insomnia each year, according to scientific studies. Chronic insomnia is generally defined as having difficulty sleeping at least three times a week for three months or more.

When it comes to sleeping difficulties, waking up—and staying up—in the middle of the night is more common than having trouble falling asleep at bedtime. But what you choose to do can make the problem much worse. 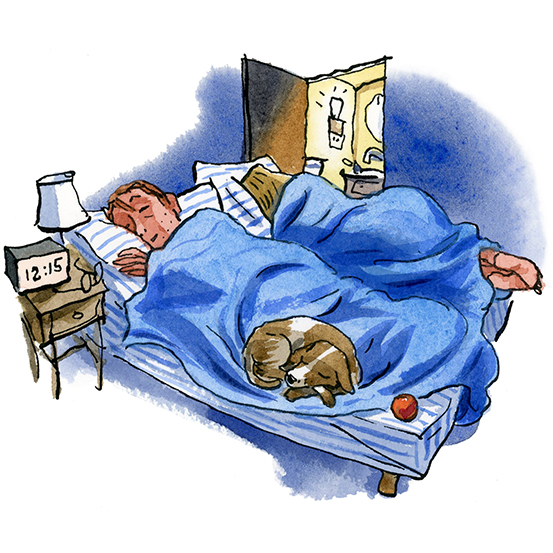 Use blackout curtains. If you do wake up to use the bathroom, don’t throw on the overhead lights. Use a night light instead. 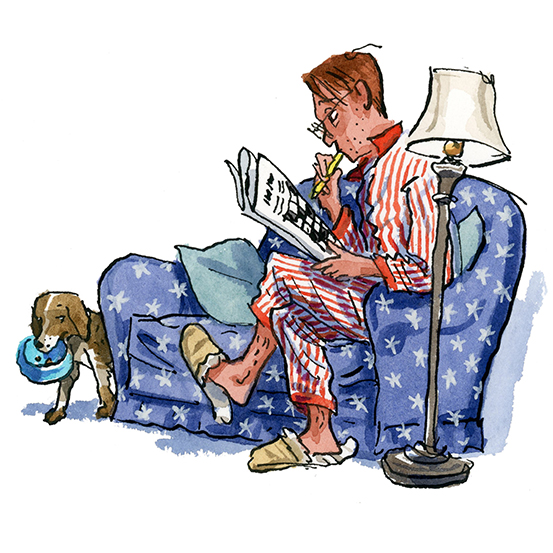 If you’re wide awake, get up. Don’t lie in bed tossing and turning. Do something sedate like knitting or Sudoku. Avoid the computer and the smartphone.

Chronic problems falling asleep at bedtime are often associated with stress and anxiety, says Michael Perlis, director of the Behavioral Sleep Medicine Program at the Perelman School of Medicine at the University of Pennsylvania. Waking up too early is often linked to depression. Either type of insomnia can be caused by a circadian rhythm disorder, where there is a mismatch between one’s biological clock and normal sleep times.

Middle-of-the-night awakenings can be caused by medical conditions like sleep apnea, chronic pain or gastroesophageal reflux disease (GERD). Older adults are more likely to wake up overnight. Hot flashes from menopause and some prostate conditions that cause frequent urination can drive people out of bed.

The best thing to do to prevent an occasional bout of middle-of-the-night insomnia from turning into a chronic problem seems simple: “Nothing,” says Dr. Perlis. “Don’t sleep in. Don’t nap. Don’t go to bed early the next day and everything will turn out fine.”

Compensating for sleep loss can fuel chronic insomnia, because it can make it tougher to sleep the next night. It is better to use caffeine to power through the day, Dr. Perlis says. If you have to get extra rest because of an important work presentation, go to bed later the next night. “Balance the books,” he says.

There are particular pitfalls, however, with middle-of-the-night insomnia. Light—from a bathroom switch or sticking your head in the refrigerator—is one. A pulse of bright light in the middle of the night can immediately suppress levels of the hormone melatonin, which is involved in regulating the sleep-wake cycle. Light at night can also throw off the circadian time system, says Daniel J. Buysse, a professor of psychiatry and clinical and translational science at the University of Pittsburgh School of Medicine.

Examining the causes of middle-of-the-night insomnia and how to treat it, WSJ’s Andrea Petersen joins ‘Lunch Break’ with Tanya Rivero with tips on getting a good night’s sleep. 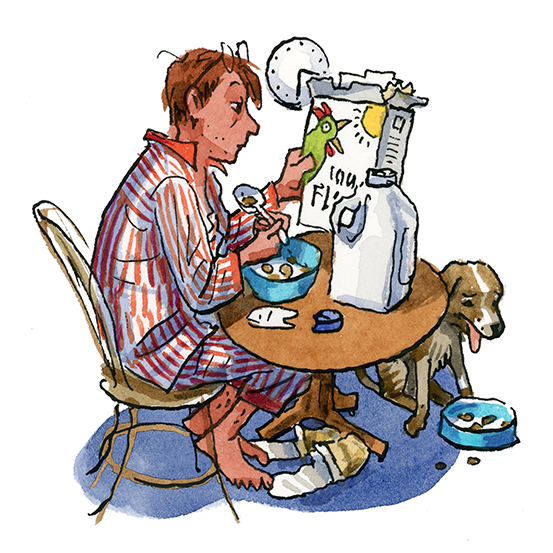 Don’t eat. Snacking in the middle of the night can condition you to keep doing it on subsequent nights. It can lead to weight gain, too. 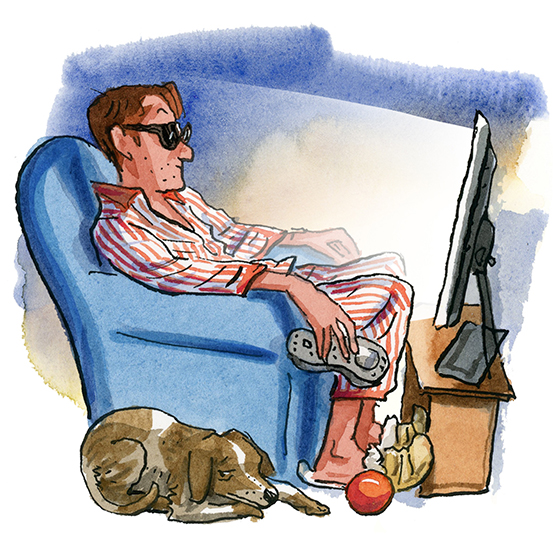 If you do watch TV, wear sunglasses. That will tone down the light and make it less likely to mess up your circadian system. 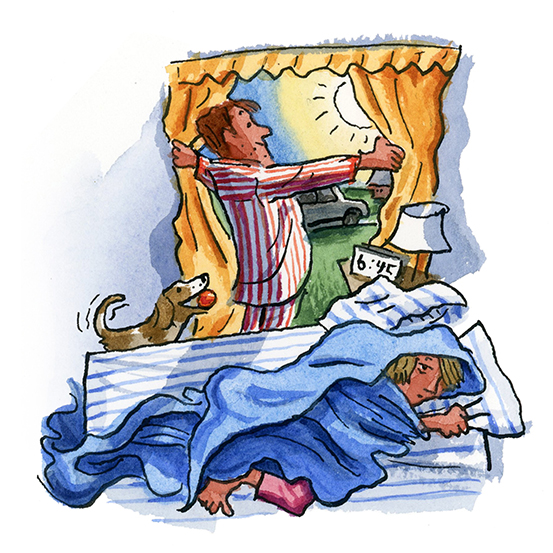 Don’t sleep in in the morning. Don’t nap and don’t go to bed early the next night. Doing any of those things will disrupt your sleep timing and can lead to more chronic insomnia.
PHOTOS: ILLUSTRATION BY RON SHEPPERSON

Depending on the time of night, bright light could make it tougher to fall asleep the next night or make you wake earlier in the morning. Dr. Buysse advises his insomnia patients to use night lights. He also recommends that people stay off their computers and smartphones.

Some doctors also forbid TV-watching in the middle of the night, though Dr. Buysse isn’t so rigid. “Don’t sit 2 inches away from the TV. And wear sunglasses,” he says.

If you can’t sleep in the middle of the night, don’t go grab a snack, Dr. Buysse says. There’s mounting scientific evidence that calories eaten then lead to more weight gain. Also, doing something rewarding, like gobbling ice cream, can easily condition the body to keep waking up on subsequent nights.

Jennifer L. Martin, a clinical psychologist and sleep specialist at UCLA, tells her insomnia patients that, if they wake up in the middle of the night, they should resist the urge to look at the clock.

She recalls one insomnia patient, who, despite treatment, wasn’t getting better. Then the patient mentioned that her three golden retrievers slept in the same bed with her. After kicking the dogs out, the patient’s sleep improved.

Chronic insomnia is treated by both medications and psychological treatments. Both tend to work equally well, studies show. Cognitive behavioral therapy for insomnia, known as CBT-I, typically includes “sleep restriction,” or limiting the amount of time patients spend in bed when they’re unable to sleep, and “stimulus control,” which means keeping the bedroom dedicated to just sleep and sex. In May 2016, the American College of Physicians recommended that CBT-I be used first, before medication, to treat chronic insomnia.

Common sleep medications include Ambien and Lunesta. But these drugs present problems. They must be taken at the beginning of the night and most people with middle-of-the-night insomnia don’t have it every night. If taken too late, they can lead to sedation the next morning.

Because they have relatively short half-lives, they don’t always keep people asleep the entire night, says Thomas Roth, director of the Sleep Disorders and Research Center at Henry Ford Hospital in Detroit, who has consulted with drug companies that make insomnia medications.

In 2011, the Food and Drug Administration approved Intermezzo, a lower-dose form of Ambien, that is intended specifically for middle-of-the-night insomnia.

Some doctors are wary of prescribing Intermezzo. “I don’t know how [patients] will interpret middle of the night,” Dr. Buysse says. “If they wake up at 5 [and take it] and their usual wake time is 6:30, now I’m getting worried.”

Dr. Roth says there’s some evidence that newer sleep medications like Silenor and Belsomra, that have longer half-lives and work differently than Ambien, might be better at preventing middle of the night awakenings.

Write to Andrea Petersen at andrea.petersen@wsj.com